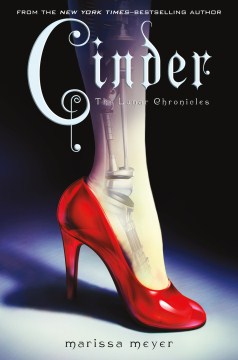 Cinder lives on Earth with her adopted stepmother and stepsisters. She is known as a cyborg which is part-machine and part human. She is ignored by society and treated horribly by her family. Cinder is expected to do all the chores and make all of the money for the household. She is known as a whiz mechanic and during one of her workdays, she meets Prince Kai. She begins to see Prince Kai regularly and starts to fall in love with him. She knows it will never work because he is a prince and has duties and obligations to the Commonwealth. There is an outbreak of a deadly disease and it is becoming more widespread. Prince Kai is worried about the plague outbreak and confides in Cinder that he must marry the Queen of Luna to save his people. Cinder learns that the Queen plans to kill Kai after the wedding and goes to the ball to warn him of her murderous plan.