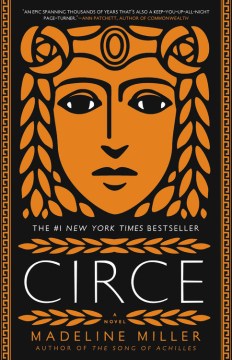 Grand Central Pub
"A bold and subversive retelling of the goddess's story," this #1 New York Times bestseller is "both epic and intimate in its scope, recasting the most infamous female figure from the Odyssey as a hero in her own right" (Alexandra Alter, The New York Times).

In the house of Helios, god of the sun and mightiest of the Titans, a daughter is born. But Circe is a strange child -- not powerful, like her father, nor viciously alluring like her mother. Turning to the world of mortals for companionship, she discovers that she does possess power -- the power of witchcraft, which can transform rivals into monsters and menace the gods themselves.

Threatened, Zeus banishes her to a deserted island, where she hones her occult craft, tames wild beasts and crosses paths with many of the most famous figures in all of mythology, including the Minotaur, Daedalus and his doomed son Icarus, the murderous Medea, and, of course, wily Odysseus.

But there is danger, too, for a woman who stands alone, and Circe unwittingly draws the wrath of both men and gods, ultimately finding herself pitted against one of the most terrifying and vengeful of the Olympians. To protect what she loves most, Circe must summon all her strength and choose, once and for all, whether she belongs with the gods she is born from, or the mortals she has come to love.

With unforgettably vivid characters, mesmerizing language, and page-turning suspense, Circe is a triumph of storytelling, an intoxicating epic of family rivalry, palace intrigue, love and loss, as well as a celebration of indomitable female strength in a man's world.

Baker & Taylor
A highly anticipated follow-up to the award-winning The Song of Achilles follows the banished witch daughter of Titans as she hones her powers and interacts with famous mythological beings before a conflict with one of the most vengeful Olympians forces her to choose between the worlds of the gods and mortals. 75,000 first printing.

Baker
& Taylor
Follows Circe, the banished witch daughter of Helios, as she hones her powers and interacts with famous mythological beings before a conflict with one of the most vengeful Olympians forces her to choose between the worlds of the gods and mortals.

The ultimate challenge of a re-telling or re-imagining of such a well-known story is, of course, that we all know how the story ends (unless the author chooses to take some MAJOR liberties). This would certainly be the case with Circe - I'm sure a lot of readers, and all you mythology buffs out t... Read More »

What a treat! I heard a few other folks mention this book, and I love Greek and Roman mythology, so I figured it would be up my alley. The nice surprise was the author's ability to make these ancient stories new again. This book would be an excellent book club pick or beach read, as it's smart bu... Read More »

This had a shaky beginning for me. I was up to my eyeballs with Miller's mythology. But once Cerce took centre stage I was along for the ride. 4.3/5

I didn’t know what to expect from this one as it is outside of my comfort zone and not something I would ordinarily choose on my own. This is the first pick for the book club I’m running at work and I’m excited to discuss it next week.

I loved reading about the witch Circe, a shunned goddess who doesn’t need anyone or anything except her herbs and her animals on her solitary island.

It was especially thrilling to read the clever ways she outsmarted men who would use brute force and try to take what wasn’t theirs.

Not only do you learn more about Circe, this books strings multiple Greek myths together to form a coherent story. This book is great for readers who grew up with Rick Riordan’s books and are now looking for something similar as they get older.

Unlike most of my peers, I did not learn about mythology in school. Circe intimidated me for far too long before I finally took the plunge to read it. How glad I am that I faced my fear! Even to my untrained mind, the chronicles of Circe were easy to follow, and with Perdita Weeks’ sublime narration, soon I was engrossed. Ostracized and outcast, Circe—the goddess, the witch—exhibits unbelievable strength and passion in her many years, and Madeline Miller has molded her into the feminist icon of my dreams. After spending so much time with her, I was emotional to say goodbye. This one should not be missed!

One of my favorite novels of the year (read together with Song of Achilles). Authentic to the ancient Greek culture, yet wholly original and modern. A powerful (though very violent/tragic) story.

The book "Circe", by Madeline Miller, tells of the life story of Circe, the immortal sorceress in Greek mythology. Daughter of a nymph and the sun god, Circe is shunned by her family, believed to be the ugliest, weakest, and most feeble of her siblings. She struggles to understand who she is, and tries again and again to please her family, always failing. She discovers her true powers as a sorceress when she awakens the true power of a magical flower that turns a human fisherman into an immortal. Broadcast as a “dangerous witch”, she searches to find her true power. When she curses one of her enemies to become a horrid sea monster, she is exiled to her personal island, where she finds peace and time to discover her powers. While in exile, she has many adventures, both in and out of her island. She goes to Crete to calm the Minotaur, meets new people all the time on her island, gets a pet bear, and even bears children. Her time on the island helps her realize who she is, and what she can do be what she truly wants to be. This book is great, because it is written in a way that makes you really “feel” Circe’s emotions and thoughts. It flows really well, and the message that the author wants to teach you is really clear and deep. Sometimes, the book can be a little confusing, when it jumps from one story about Circe to the next, but it is really well written and recommended for people who like a medium paced book filled with emotion and action.

If you love Greek Mythology, then this wonderful novel is for you!

If you are interested in Greek mythology you will love this book. An imagined retelling of Circe with lots of other Gods and mortals mixed in.

I read this several months ago, but just keep coming back to it. I absolutely love this rendition of Circe as a femme fatale, but with far more humanizing traits. Circe is probably my favorite mythological figure now, especially as Miller writes her: a symbol of female empowerment and her role as a strong mother. Please, please read this! I can't wait to read Song of Achilles now :)

Fabulous book!! I'm not very familiar with the fantasy genre, but I loved this novel so much I gave it to my mother as a Mother's Day gift and she also thoroughly enjoyed it. Re the genre, I've only (also) read The Crystal Cave trilogy by Mary Stewart and the Lord of the Rings trilogy-- I'm very impressed with all, but Circe is my favorite.

Humbling women seems to me a chief pastime of poets. As if there can be no story unless we crawl and weep.

He showed me his scars, and in return he Let me pretend that I had none.

But most of all my father’s voice, speaking those words like trash he dropped. Such as you. Any other day in all my years of life I would have curled upon myself and wept. But that day his scorn was like a spark falling on dry tinder.

“Witches are not so delicate.”

“You have always been the worst of my children,” he said. “Be sure to not dishonor me.”
“I have a better idea. I will do as I please, and when you count your children, leave me out.”

“Humbling women seems to me a chief pastime of poets. As if there can be no story unless we crawl and weep.”

“But in a solitary life, there are rare moments when another soul dips near yours, as stars once a year brush the earth. Such a constellation was he to me.”

But perhaps no parent can truly see their child. When we look we see only the mirror of our own faults.

WHEN I WAS BORN, the name for what I was did not exist. They called me nymph, assuming I would be like my mother and aunts and thousand cousins. Least of the lesser goddesses, our powers were so modest they could scarcely ensure our eternities. We spoke to fish and nurtured flowers, coaxed drops from the clouds or salt from the waves. That word, nymph, paced out the length and breadth of our futures. In our language, it means not just goddess, but bride.
===
See her arrange her dress so it drapes just so over her shoulders. I see her dab her fingers, glinting, in the water. I have seen her do a thousand such tricks a thousand times. My father always fell for them. He believed the world’s natural order was to please him.
===

Once when I was young I asked what mortals looked like. My father said, “You may say they are shaped like us, but only as the worm is shaped like the whale.” My mother had been simpler: like savage bags of rotten flesh.

ArapahoeTina thinks this title is suitable for 15 years and over

muchai thinks this title is suitable for 12 years and over