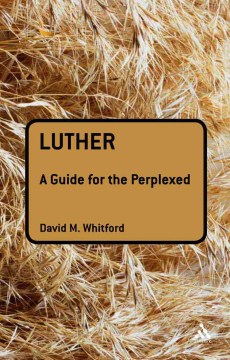 A Guide for the Perplexed

NBN
An upper-level introduction to the German Reformer Martin Luther, who by his thought and action started the Reformation movement.
>

Book News
Martin Luther was one of the most influential theologians in Christian history. His over 100 works have shaped not only a vast portion of Christian doctrine but have also heavily influenced social and political movements for hundreds of years. In spite of all this, Luther's theology is often misunderstood and presents confusion for many. This book by Whitford (history of Christianity, United Theological Seminary, Ohio) offers an easy to understand explanation of Luther's theological contributions as well as his life and how it relates to his work. This fresh approach to Luther is well suited for both the beginning and seasoned theology student. Annotation ©2011 Book News, Inc., Portland, OR (booknews.com)

Blackwell Publishing
`Martin Luther is for the most part fascinating, sometimes annoying, and for many people perplexing: Whitford provides an insight to the reformer's biographical context, his theological foundations and primarily his political theory. At no point does Whitford evade discussing problems in Luther's theology, instead inviting discussion with him concerning his interpretation. This book should be read by beginners in Luther studies, taking their first steps, as well as by scholars who seek a fresh perspective on Luther.' Volker Leppin, University of Tubingen, Germany

`Whitford's graceful new study does exactly what its title promises: guide readers who have only a vague notion of Martin Luther through his life, ideas, and key writings. The book explains complex theological issues in clear, but not overly simplistic, language, and does not avoid the controversies in which Luther was involved, many of which remain matters of debate today: Do humans have free will? Does religion allow one to oppose the government? How should Christians regard the Jews? How should Christians regard-and treat-each other?' Merry E. Wiesner-Hanks, University of Wisconsin-Milwaukee, USA

`Whitford takes twenty-first century readers without much background in the Europe of the sixteenth century in hand and offers views of Martin Luther's life and thought that provide a path into his world and way of proclaiming the biblical message to his contemporaries. Readers in conversation with the author gain facts and flavour as they move across the bridges he builds from now back to then.'Robert Kolb, Concordia Seminary, USA