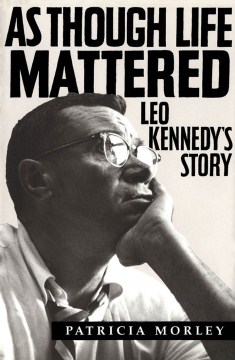 As Though Life Mattered

McGill Queens Univ Pr
In Montreal in the 1920s and 1930s, a small group of radical young writers Leo Kennedy, Frank Scott, A.M. Klein, and A.J.M. Smith transformed Canadian poetry with enthusiasm, talent, and the creation of a modern alternative press.
Born of Irish immigrant stock, Kennedy earned his own living from the age of fourteen after his formal education ended at Grade Six. In a circle of privilege, he was the outsider. Despite this, his intelligence, imagination, and wit, coupled with an intense love of language and learning, opened many doors. Kennedy's choices in religion, friendship, marriage, and business were deeply influenced by the same yearning for justice and defence of humane values that informed his verse, stories, and essays. A successfully published poet at the age of 26 (The Shrouding, 1933), Kennedy soon left his literary world for that of the emerging business of advertising in order to support his family during the Depression. Acknowledging Kennedy's tendency to embroider the facts of his life a tendency rooted in the same talent that made him an important poet and an extremely successful advertising copywriter in corporate America Patricia Morley traces the roots of Kennedy's preoccupations and the development of his art from his birth in Liverpool in 1907 to his self-described "exile" in the United States. His return to Canada in 1976 brought renewed public recognition of his place among the "Montreal Poets." Kennedy experienced culture shock, yet he thrived and, in blackly comic letters, raged against the youth culture of his grandsons and the ironies of aging. With sympathy and insight into the vulnerability of genius, Morley catches the triumph of a most unusual life and restores a forgotten writer to his rightful place.

Book News
Kennedy was one of the "Montreal poets" in the 1920s and 1930s, a small group of radical young writers who transformed Canadian poetry. By the age of 26, he was successfully published ( The Shrouding , 1933), but he soon left his literary world in order to support his family during the Depression by writing advertising. This biography captures the unusual life and spirit of a largely forgotten talent. Annotation copyright Book News, Inc. Portland, Or.