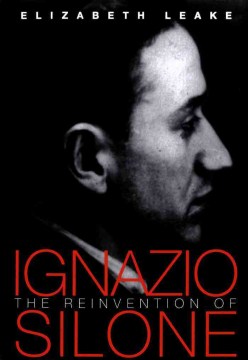 The Reinvention of Ignazio Silone

The Reinvention of Ignazio Silone raises complex theoretical issues about authorship and audiences and about the relationship between text and context.

In 1996, Ignazio Silone, one of the most beloved folk heroes of the Italian Left, a novelist and a high-ranking Communist Party member, was unmasked as a secret supporter of the Fascist movement. The discovery sparked a highly emotional response among scholars and the press in Italy and beyond, with reactions ranging from debate to disbelief.

Elizabeth Leake's fascinating study provides a new analysis of Silone's fiction based on the discovery of his double life. Drawing on a psychoanalytic approach, the author re-reads Silone's novels in the light of his inevitable struggle with his own duplicity. Enriched by extensive and original archival research, The Reinvention of Ignazio Silone also raises complex theoretical issues about authorship and audiences and about the relationship between text and context.

Beautifully written and passionately argued, this work will appeal to a wide readership, including those interested in the history of the left and in literary criticism, as well as scholars of Italian history, literature and politics.

Winner of the Aldo and Jeanne Scaglione Publication Award for a Manuscript in Italian Literary Studies, presented by the Modern Language Association of America.

Book News
Silone (1900-78) was a founder of the Italian Communist Party in 1921, explains Leake (Italian, Rutgers U.), and held important offices in it until he suddenly left the party in 1929 because it had become too beholden to the Soviets. She focuses on how, after World War II, he transformed himself from a political activist into a world-famous novelist extolling the theoretical virtues of communism while berating its practice. Annotation (c) Book News, Inc., Portland, OR (booknews.com)