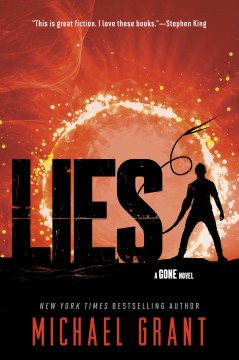 As conditions worsen in the FAYZ, where supernatural forces have trapped children under the age of fifteen and resources are running out, it becomes tempting to heed the words of a prophet who says that only death will set them free.
Publisher: New York : Katherine Tegen Books, ©2010
Edition: 1st ed
ISBN: 9780062001474
0062001477

i read this book to fulfil the goal read a book from your favorite prompt on past pop sugar reading challenges (finish the next book in a series). i am loving the twists in this series. i won't read them at night because they scare me just a little, but i can't wait to find out what happens. probably going to read the rest of the series without a prompt just because i can't wait for next year to find out what happens.

I found this book very interesting. I really feel for Sam and how one minute they want him to do everything and the next he is pushed to the side, and it does cause for a lot if internal struggle. Grant could have captured this better, but he did an amazing job. The new characters always shock me.

In a continuation of a brilliant plot laid out by two incredible predecessors, Lies touches base on much more social and internal conflict, its framework having been built in Hunger. Lies focuses on the political structure of the kids within the Fallout Alley Youth Zone and the conflicts within the newly formed “council” of the FAYZ. The main antagonist introduced from the last book doesn’t make much of an appearance in this book, which readers may have mixed feelings about. Lies, if possible, develops characters even better than its predecessors and really digs down deep into each character’s moral base. This book arguably sets up the rest of the series better for the next book in the series, hinting at many possible future events that really add to the overall appeal of this book. The main downfalls with Lies are similar across the board- the maturity level will confuse many readers. The overall age maturity inconsistency shows a bit more here, as the younger kids come a bit more into the light. Of course, the dark theme to this book isn’t for anyone. This book is amazing, however, and recommended for anyone who likes fast-paced dystopian action with moral beliefs arising, as long as they can handle the content of the book. 4/5, for extremely well written fiction.
- @interneuron of the Teen Review Board of the Hamilton Public Library

Lies is the third book in the Gone series, which follows the children of Perdido Beach struggling to survive within the supernatural occurrence that is the FAYZ. In Lies, when the situation for the residents of the FAYZ become more and more dire, a prophet comes forward telling them that death will set them free from the FAYZ. I think this book upholds the Gone series’ quality and does a great job building upon Gone and Hunger. This book focused a lot more on building the characters and furthering the social divide story arch seen in the previous books. I found that this story was probably one of the best one yet, and starts to make the series darker, which I think is fitting for a survival/dystopia styled story. Lies is another great addition to the series. 5/5 Stars
- @Fulton of the Teen Review Board at the Hamilton Public Library

I actually didn't piece together that the two on the cover are actually Astrid and Sam. Wow that was just a bit mind blowing considering that was NOT how I imagined them at all. But in general, this book fell a bit short from where I wanted it to go. As many other readers may mention, the sci-fi parts lack in comparison to the first two books. While some may appreciate this, I didn't. With the title being what it is and all, there is a guaranteed factor of suspense in which readers will start pondering the lines between reality and distortion. As it is with many books, does a distinct line really need to be made clear though?
- @Siri of the Teen Review Board of the Hamilton Public Library

best book ever cant wait to read the next

Sam has lots on his plate. The children a dealing with food battles with new creatures. New rules and lots of battles.

Lies – Book three in the Gone Novel Series; an excellent book! If you enjoyed this book, read Charlie Higson’s The Enemy book series starting with ‘The Enemy.’ Doctor-at-Bass! T. A.

Michael Grant does it again!

RNSRL thinks this title is suitable for 13 years and over

andrewzo thinks this title is suitable for 13 years and over

friendofbob thinks this title is suitable for 13 years and over

Emawesome thinks this title is suitable for 13 years and over

Eeee11 thinks this title is suitable for 12 years and over

Mahala thinks this title is suitable for 15 years and over

“And yes, we do have some food. Maybe you'd like to join us? Unless you want to stick with your sheep sushi.”

"The devil does not have a fork Brianna, he has a whip.”

“Hey, thanks for stopping by," Howard said. "I'd offer you some tea and cookies, but all we have is boiled mole and artichokes. Plus, we kind of have a dead girl in the living room.”

Astrid hated that this was what life so often came dopwn to in the FAYZ "my weapon is bigger then your weapon".

Lies is the third in this series, following Gone and Hunger. Plague is scheduled for release in April of 2011. Nothing is ever easy in the FAYZ. The residents barely survive one threat before facing another one. In this latest installment, people thought dead now walk the streets, the non-freaks (Grant's terminology, not mine) are beginning to resent the Freaks (those with strange powers), and what little semblance of order there was from the establishment of the Town Council quickly evaporates. Zil, leader of the Human Crew sets fire to the town in an attempt to take power away from the mutants (freaks). Osray, now labeled the Prophetess by her strange new companion Nerezza, seems to be telling the children they should embrace the "poof" or maybe even death as a way to escape the FAYZ. As tempers flare, people go hungry and the evil darkness threatens to return (if it ever really left), Sam, Astrid, Edilio and the others must find a way to survive. And even if they survive what will they be facing next?

I can't wait for the next installment