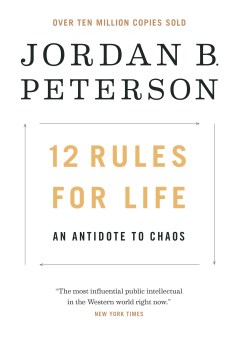 An Antidote to Chaos

"What does everyone in the modern world need to know? Renowned psychologist Jordan B. Peterson's answer to this most difficult of questions uniquely combines the hard-won truths of ancient tradition with the stunning revelations of cutting-edge scientific research. Humorous, surprising and informative, Dr. Peterson tells us why skateboarding boys and girls must be left alone, what terrible fate awaits those who criticize too easily, and why you should always pet a cat when you meet one on the street. What does the nervous system of the lowly lobster have to tell us about standing up straight (with our shoulders back) and about success in life? Why did ancient Egyptians worship the capacity to pay careful attention as the highest of gods? What dreadful paths do people tread when they become resentful, arrogant and vengeful? Dr. Peterson journeys broadly, discussing discipline, freedom, adventure and responsibility, distilling the world's wisdom into 12 practical and profound rules for life. 12 Rules for Life shatters the modern commonplaces of science, faith and human nature, while transforming and ennobling the mind and spirit of its readers."--
Publisher: Toronto :, Random House Canada,, [2018]
Copyright Date: ©2018
ISBN: 9780345816047
0345816048
0345816021
9780345816023

This type of book are for those who have insatiable thirsts for different takes on living a good life. I honestly love Peterson's rambling, if you have ever heard him talk he writes in the same way. These "rules" are just guidelines, but they're darn good ones. You can take them or leave them.

This book was recommended to me by two people I respect, and who respect me. Basically they said “Just read it, I’d like to know what you think.”
So I did. And I’m still not sure what I think.
Peterson is in the news these days for sad reasons (a reported near-death experience due to a reported addiction to meds—but even that is shrouded in mystery), and there’s nothing un-complicated about this guy, it seems.
General review: some good, or even great advice at times about ways to make yourself a better person in the world, mixed with some provocative ideas and principles at other times. But far, far, far, far too long-winded and meandering--400 pages that easily could have been written in 200—hell...even 150 pages. We get it, you’re smart, well read, and can recite biblical passages and the works of Freud and Jung from memory. But for at least 3 chapters later in the book I read the first 3-4 pages, skimmed through 20 , then read the last 3-4 where he concludes his “thesis”. And that’s what it felt like...every chapter—a thesis.
Like I said, some of it was really worth reading...and I’m glad I read it. But some of it was too much. It loses its impact after 50 tangents.
Chapter/Rule 11: “Do not bother children when they are skateboarding” was the most provocative chapter in the book...basically trying to debunk the modern concept of changing gender roles.
If you want to dive into all the “controversial” stuff about Peterson, feel free to Google. I just wanted to read the book.

Great book, inspirational but too dry to read. He spend too much time on other things that are irrelevant to his rules on each of his chapters. After 6 chapters, I feel it a bit too dull... Continuous battle between consciousness and drifting off by the book, finally... I finish the book!

I tried to like this book but found it full of unconnected generalizations. He's smart enough in content (and his words) but it makes too many biblical references to stand alone as a book. I sufferred through 8 disks before i gave up so you wouldn't have to. There are much better books that get to the points faster.

Overrated. The page containing the 12 rules is enough. The chapters are disjointed and unfocused.

IMHO, this was a chore to read. I felt that the author was evangelizing and portraying his ideas using religion a bit too strongly.

Whatever has been said in laud of this book has not been enough. Simply life changing. Someone in this comment section has stated that the author is verbose, but I would say I wanted more.
Jordan Peterson is a master at explaining in simple, layman terms all the knowledge that he has accumulated in his practice as a clinical Psychologist.

Excellent book! I would highly recommend reading it and sharing it widely. What I love most is his synthesis of material, helping us make important connections between the knowledge and information brought forth by psychologists, philosophers, writers, and the spiritual beliefs Western culture is built on. A seminal book for our times and a personal guide for transformation.

After reading a copy at the library I bought my own copy and extras to give to other people. This is the only book since college that I not only read two times, but took the trouble to underline pertinent sections on my second time through. Some of the chapters contained "nothing new" only "common sense" said in new ways. Other sections got me thinking about issues that I have not considered before. An example is letting men do dangerous things as children (ride skateboards) because it is practice for what we all should deeply appreciate; the common sacrifices many men make to do the dangerous things like climb 350 foot tall electricity generating windmills, build sky scrappers, and keep our utilities in good repair even during snow storms. Most of Pederson's followers are supposed to be young men who are starved for mentors encouraging them to become men. I am an older woman and I appreciate his ideas as well. I think he will be considered to be one of the most important intellectual thinkers of our time.

And once in Hell, it is very easy to curse Being itself. And no wonder. But it's not justifiable. *And that's why the King of the Damned is a poor judge of Being.* 2/2

Failure to make the proper sacrifices, failure to reveal yourself, failure to live and tell the truth--all that weakens you. In that weakened state, you will be unable to thrive in the world, and you will be of no benefit to yourself or to others. You will fail and suffer, stupidly. That will corrupt your soul. How could it be otherwise? Life is hard enough when it is going well. But when it's going badly? And I have learned through painful experience that nothing is going so badly that it can't be made worse. This is why Hell is a bottomless pit. This is why Hell is associated with that aforementioned sin. In the most awful of cases, the terrible suffering of unfortunate souls becomes attributable, by their own judgment, to mistakes they made knowingly in the past: acts of betrayal, deception, cruelty, carelessness, cowardice, and, most commonly of all, willful blindness. To suffer terribly and to know yourself as the cause: that is Hell. 1/2

But it's a temporary solution, for predictable and sullen obedience. Who can live forever with that? But negotiation--that requires forthright admission on the part of both players that the dragon exists. That's a reality difficult to face, even when it's still too small to simply devour the knight who dares confront it. 2/2

In many households, in recent decades, the traditional household division of labor has been demolished, not least in the name of liberation and freedom. That demolition, however, has not left so much glorious lack of restriction in its wake as chaos, conflict, and indeterminacy. The escape from tyranny is often followed not by Paradise, but by a sojourn in the desert--aimless, confused, and deprived. Furthermore, in the absence of agreed-upon tradition (and the constraints--often uncomfortable; often even unreasonable--that it imposes), there exist only three difficult options: slavery, tyranny, or negotiation. The slave merely does what he or she is told--happy, perhaps, to shed the responsibility--and solves the problem of complexity in that manner. But it's a temporary solution. The spirit of the slave rebels. The tyrant merely tells the slave what to do, and solves the problem of complexity in that manner. 1/2

The heightened knowledge of fragility and mortality produced by death can terrify, embitter, and separate. It can also awaken. It can remind those who grieve not to take the people who love them for granted. Once I did some chilling calculations regarding my parents, who are in their eighties. It was an example of the hated arithmetic we encountered in the discussion of Rule 5 (Do not let your children do anything that makes you dislike them)--and I walked through the equations so that I would stay properly conscious. I see my Mom and Dad about twice a year. We generally spend several weeks together. We talk on the phone in the interim between visits. But the life expectancy of people in their eighties is under ten years. That means I am likely to see my parents, if I am fortunate, fewer than twenty more times. That's a terrible thing to know. But knowing it puts a stop to my taking those opportunities for granted.

It is necessary to be strong in the face of death, because death is intrinsic to life. It is for this reason that I tell my students: aim to be the person at your father's funeral that everyone, in their grief and misery, can rely on. There's a worthy and noble ambition: strength in the face of adversity. That is very different from the wish for a life free of trouble.

Hating life, despising life--even for the genuine pain that life inflicts--merely serves to make life itself worse, unbearably worse. There is no genuine protest in that. There is no goodness in that, only the desire to produce suffering, for the sake of suffering. That is the very essence of evil. People who come to that kind of thinking are one step from total mayhem. Sometimes they merely lack the tools. Sometimes, like Stalin, they have their finger on the nuclear button.

In societies that are well-functioning--not in comparison to a hypothetical utopia, but contrasted with other existing or historical cultures--*competence*, not power, is a prime determiner of status. Competence. Ability. Skill. Not *power*. This is obvious both anecdotally and factually. No one with brain cancer is equity-minded enough to refuse the service of the surgeon with the best education, the best reputation, and, perhaps, the highest earnings. Furthermore, the most valid personality-trait predictors of long-term success in Western countries are intelligence (as measured with cognitive ability or IQ tests) and conscientiousness (a trait characterized by industriousness and orderliness).

Tell the truth. Or, at least, don't lie.

FranciscoSandoval thinks this title is suitable for 15 years and over