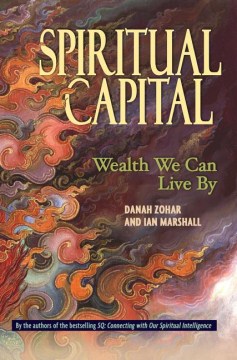 Wealth We Can Live by

Baker & Taylor
The authors of SQ: Connecting with Our Spiritual Intelligence urges readers to look beyond greed to see "profit" as a resource that should be shared by a community, thereby redefining "capital" in a capitalistic society.

Book News
Aimed at business leaders, this text asserts that capitalism as we know it, with its single-minded focus on the accumulation of material capital, is ultimately not sustainable. In contrast, Zohar and Marshall offer a vision of a spiritually based capitalism in which businesses act to promote the common good and ensure the sustainability of their enterprises. Presenters of international workshops on contemporary leadership, Zohar and Marshall are also the authors of SQ; Spiritual Intelligence . Annotation ©2004 Book News, Inc., Portland, OR (booknews.com)

Ingram Publishing Services
""Spiritual Capital"" presents a new vision of capitalist society that transcends the greed, materialism, and meaninglessness so rampant today. It offers an idea of wealth, profit, and capital that's about more than simply money.

Blackwell North Amer
Our capitalist culture and the business practices that operate within it are in crisis. Capitalism as we know it today—an amoral culture of short-term self-interest, profit maximization, emphasis on shareholder value, isolationist thinking, and profligate disregard of long-term consequences—is an unsustainable system, a monster set to consume itself.

Danah Zohar and Ian Marshall argue that a critical mass of individuals acting from higher motivations can make a difference. They offer a radically new philosophy for corporate governance that alters the meaning and purpose of business and wealth creation. They describe a values-based business culture that focuses on the accumulation of “spiritual capital” rather than material capital. Rather than strictly benefiting shareholders, spiritual capital benefits all stakeholders—including the whole human race, present and future, and the planet itself. Spiritual capital nourishes and sustains the human spirit.

Danah Zohar and Ian Marshall introduce the concept of spiritual intelligence (SQ), and describe how it can be used to shift individuals and our culture from a state of acting from lower motivations (fear, greed, anger, and self-assertion) to one of acting from higher motivations (exploration, cooperation, power-within, mastery, and higher service). They show how this shift actually happens in a given organizational culture. They look in depth at the issues that dominate corporate culture and examine the role of the leadership elite who must be the ones to bring about and embody this cultural shift. Finally, Zohar and Marshall argue that spiritual capital is a valid and workable form of capitalism and detail what we, as individuals, can do to make it happen.

Loading...
No similar edition of this title was found at NPL.

Try searching for Spiritual Capital to see if NPL owns related versions of the work.