Saved Searches Advanced Search
NPL is in a new stage of reopening - check nelsonlibrary.ca for details 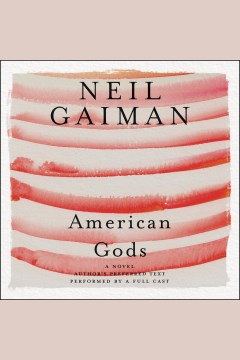 As Shadow is about to be released from prison, he learns that his beloved wife has been killed in an accident. Feeling he has nothing else to lose, he becomes involved in a dangerous scheme that could cause him to lose more than he ever imagined.
I have never liked stories of gods who are tortured and die on a gallows/cross/tree. And here I read it the last week of Lent. Yikes. Odin, Osiris, Adoni, Mithra, finally Jesus.
I pretty much quit watching/reading science fiction, too, with ET. The dying and rising just doesn't work. Sheesh. Lord of the Rings. Get over it. People die and don't come back. Dead. Like Laura. (...finally...)
I never really cared about the main character. That’s kind of something that’s central to liking a story. I first thought this was a fantasy tongue in cheek comedy, but I think Gaiman and his fans take all this seriously, even if they’re all atheists. Just weird.
What’s his final message? That it’s enough to be a man, says Shadow, a man doesn’t need people to worship him to keep on. Hmmm... It took 20 hours to say this...
I’m just underwhelmed.
BTW Odin is of the Aesir gods; the Vanir are the older Norse gods. The Vanir never made it to America...? Hmmm...

Thought provoking and insightful, American Gods by Neil Gaiman is nothing short of astonishing. Before I continue, I must recommend you listen to the 10th anniversary edition audiobook by John Marshal Media. It was produced by a full cast and had segments narrated by Neil Gaiman himself. There is something to be said for an audiobook that can clearly transport you to the world in which the story is set, more if you can feel the jolt of excitement as you recognize a voice that adds to the suspense. But I digress from the tale. Neil Gaiman showcases the America that is not seen in international media, he shows the small towns and the roadside attractions that are lost to the background of the country. He does an amazing job creating a thriller from myths and legends. The incredible aspect of the story is that he’s allowed for different types of gods from different religions and different ideologies to flourish in this story. Following Shadow, an ex-convict who took a job from the wrong man, you start to wonder about different religions and how the America sees itself. A beautiful read in this day and age. Neil Gaiman manages to capture the imagination and beliefs in this wonderful novel.

It felt a little too long for me - but it's a fun and original read. Entertaining concepts with a nice mix of dark, gruesome comedy.

Shadow has just been approved for release from prison. He's looking forward to reuniting with his beloved wife, Laura. But just as he's been released, he learns that Laura & his best friend were both killed in the same car accident. His first destination after prison release: his wife's funeral. It is there that he learns the unpleasant truth behind the cause of the car accident. It seems that his wife & best friend were getting a little too "familiar" with one another when they were hit by an oncoming car. Learning this, however, does not diminish Shadow's love & devotion to his wife which comes in handy when his deceased wife begins appearing to him in the form of a zombie/ghost something-or-other as a way to warn him about things he is getting involved in. Shadow has been recruited by Mr Wednesday for a very high-paying, very dangerous job. He finds himself traveling the country from time-to-time meeting contacts of Mr Wednesday's. Between trips, Shadow has been instructed to lay low in a small town in northern Wisconsin. He begins to get to know a few people, make some connections, when he become suspicious of some of the strange things that go on here every year. In a near-death experience, he learns the truth about the suspicious going-ons & reveals the truth, bringing sad justice upon the wrong-doer. He also learns the truth about who Mr Wednesday really was & what connection he had with him.

Dark, suspicious, & at some times sad, you would think this would not be as highly rated & loved by so many people. But, here I am, joining the crowd & casting my vote for this book as a "must read". I think what really brought meaning to the story was Neil Gaiman's comments at the end of the story on why he wrote this book & why he picked this title.

This might be the best book to listen to on long road trips. It's almost as if you are travelling with Shadow and getting caught up in the story also helps you appreciate the vastness of the American landscape. This book would be make a great literary pilgrimage for anyone with the time.

By turns funny and deep, this book is a real thought factory.

Neil Gaiman reads so well that I think he'd do a bang-up job reading a software instruction manual. The story is engrossing, mythic, and modern. A must!

The audio version of American Gods is fantastic. It has a full cast of readers (including the author) voicing the various characters which adds more texture and depth to the story telling. It is like listening to a movie with all the visuals taking place in your imagination.

This was a joy to listen to on audio. Spectacular narration aside the story was enthralling - forgotten gods from all beliefs forced to make their way in modern day America as cab drivers, petty criminals, prostitutes etc? Sign me up! Even though the main character, Shadow, is a convict violating his parole I found him to be by far the most respectable, reliable character. I would love to read a book of short stories just focusing on the gods and their various predicaments.

Please let us know if the audiobook won't play -- we don't know unless you tell us. We can usually clean it up so it plays like new.